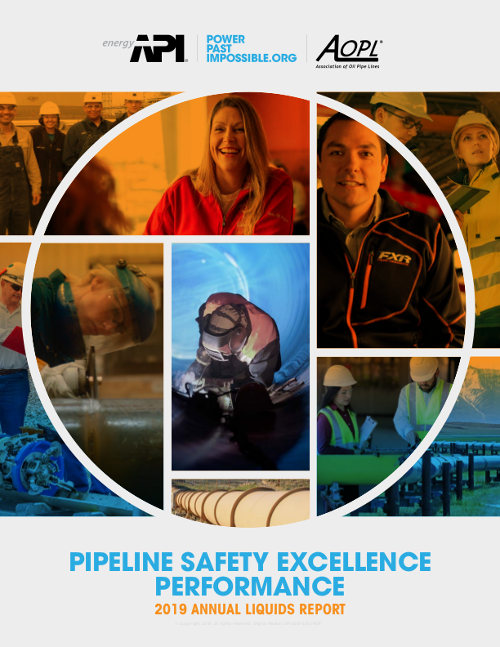 The American Petroleum Institute (API), in coordination with the Association of Oil Pipe Lines (AOPL), recently released the 2019 Liquids Pipeline Performance Report, detailing how liquids pipeline incidents impacting people or the environment have decreased 20 percent over the last five years, while pipeline mileage and barrels delivered have increased over 10 percent.

“The natural gas and oil industry continues to demonstrate that safety is our number one priority – with pipeline incidents declining over twenty percent in the last five years,” said API Pipeline Manager David Murk. “Our industry continues to use cutting edge technologies, share lessons learned and leverage data to address pipeline risks as we work towards our goal of zero incidents. The industry is meeting increasing demand for gasoline, jet fuel and petroleum products that power our modern way of life, all while operating safely and protecting employees, surrounding communities and the environment.”

Each year API and AOPL download data collected by the U.S. Pipeline and Hazardous Materials Safety Administration and analyze it for where pipeline operators are making progress and to focus upcoming industry-wide safety improvement efforts.

“Government data captured in this report shows how liquids pipelines are getting safer with fewer pipeline incidents impacting people or the environment,” said Andy Black, present and CEO of AOPL.

The 2019 API-AOPL Liquids Pipeline Performance Report is available on the API website.

API is the only national trade association representing all facets of the natural gas and oil industry, which supports 10.3 million U.S. jobs and nearly 8 percent of the U.S. economy. API’s more than 600 members include large integrated companies, as well as exploration and production, refining, marketing, pipeline, marine businesses, and service and supply firms. They provide most of the nation’s energy and are backed by a growing grassroots movement of more than 47 million Americans. API was formed in 1919 as a standards-setting organization. In its first 100 years, API has developed more than 700 standards to enhance operational and environmental safety, efficiency and sustainability.