The Marcellus and Utica shale plays continue to supply massive amounts of natural gas and related products. However, these resources remain relatively landlocked in the region because of lacking pipeline infrastructure. Relieving these transportation constraints continue to drive pipeline expansion in the United States.

Over the next few years, the Northeast and Midwest account for several billion dollars in investment and hundreds of miles of pipelines to transport natural gas from the Appalachian Basin to dense population areas. Pipeline companies are rushing to answer the call for increased supply of natural gas, liquefied natural gas (LNG) and natural gas liquids (NGLs).

The following is a roundup of some of the more significant natural gas pipeline projects currently under development.

Access Northeast Project
Location: New England
Stakeholder(s): Spectra Energy, Eversource Energy (Northeast Utilities) and National Grid
Overview: The Access Northeast project is designed to meet growing demand for natural gas in New England and address critical supply challenges in the region. The project involves the expansion of 125 miles of the existing Algonquin pipeline system, as well as the expansion of existing market area storage of LNG in Acushnet, Massachusetts. The project will deliver up to 1 billion cubic feet per day (Bcf/d) of of natural gas and is estimated to cost roughly $3 billion. National Grid joined the development partners in February, as the group launched an open season that ended in May. The stakeholders are in the process of finalizing the scope of the project and plans to apply for approval from the Federal Energy Regulatory Commission (FERC) by the end of this year or early 2016. The developers anticipate receiving approval by 2017, with an estimated in-service date of fourth quarter 2018.

Alaska LNG Project
Location: Alaska
Stakeholder(s): Alaska Gasline Development Corp. (AGDC), ExxonMobil, BP, ConocoPhillips and TransCanada
Overview: During the last year, the Alaska LNG project has become a state-led venture. In September, the state of Alaska (through the AGDC) and ConocoPhillips Alaska Inc. executed a Memorandum of Understanding MOU) regarding negotiations to form a joint venture company that could facilitate marketing LNG from the Alaska LNG project to global markets and acquire North Slope gas, with the goal of bringing LNG buyers and North Slope wellhead sellers together. AGDC and ConocoPhillips also intend to pursue the support of the other major North Slope producers in the formation of the joint venture. This MOU is part of AGDC’s broader plan to position the Alaska LNG Project for a front-end engineering and design (FEED) decision. The project includes a gas treatment plant, a liquefaction facility and an 800-mile, 42-in. pipeline from the North Slope production area to Nikiski, Alaska, with a maximum capacity of 3.3 billion cubic feet per day (Bcf/d). 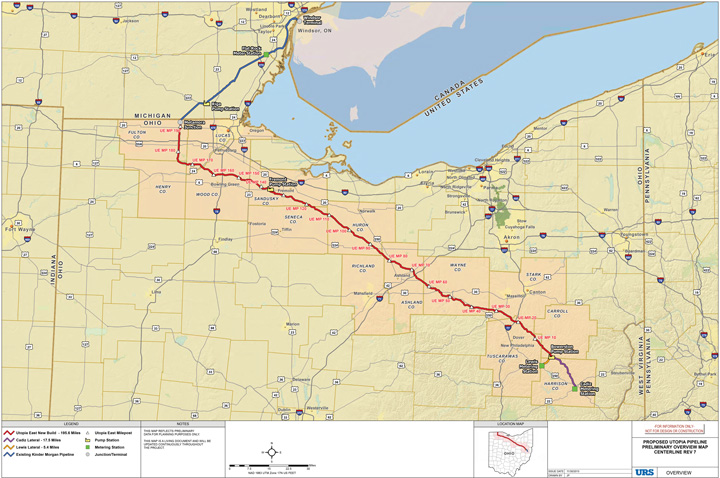 The NEXUS Gas Transmission project was designed to address pipeline transportation infrastructure needs from the Marcellus and Utica shale plays to markets in the U.S. Midwest and eastern Canada. The U.S. Federal Energy Regulatory Commission its final environmental impact statement on the project on Nov. 30, eliminating proposed route alternatives from further consideration.

NEXUS Gas Transmission
Location: Ohio, Michigan, Chicago, Ontario
Stakeholder(s): DTE Energy and Spectra Energy
Overview: FERC issued its FEIS for NEXUS on Nov. 30, which eliminated proposed route alternatives from further consideration. The commission evaluated alternatives but found that “none of these would offer a major environmental advantage over the proposed route,” according to the statement. The NEXUS Gas Transmission (NGT) system was designed to address pipeline transportation infrastructure needs in the upper U.S. Midwest and eastern Canadian regions by transporting natural gas supplies from Appalachian shale plays and serve local distribution companies, power generators and industrial users in these markets. The NGT project will originate in northeastern Ohio, include approximately 255 miles of large diameter pipe and be capable of transporting at least 1.5 Bcf/d of natural gas. As proposed, the path will utilize both existing and expansion capacity on the DTE Gas transportation system and the Vector Pipeline System to access Michigan markets, Chicago and the Dawn Hub in Ontario. The project is expected to be in-service by the end of 2017.

Prairie State Pipeline
Location: Illinois
Stakeholder(s): Tallgrass Development LP and AGL Resources
Overview: The proposed Prairie State Pipeline is a 140-mile, large diameter pipeline that will move gas from supply connections in central Illinois to the Chicago Market Center and points in between, with an expected capacity between 1.2 and 1.5 Bcf/d and will include new compressor stations and multiple receipt and delivery points along its route. The pipeline will provide direct access to delivery points, large storage fields with significant injection capacity and several city gates that provide diverse and year round demand. Average daily demand for the points along this pipeline is estimated to exceed 3.5 Bcf/d, with peak day winter demand at up to triple that level. The proposed route for the pipeline originates in Douglas County, Illinois, with potential receipt points at Rockies Express, Trunkline and Panhandle Eastern, and continuing up through central Illinois and terminating in the Chicago Market Center at anticipated interconnects with Nicor Gas, Peoples Gas Light and Coke, Ameren, North Shore Gas Co., ANR Pipeline, Natural Gas Pipeline Co. of America, Northern Border Pipeline, Alliance Pipeline, Horizon Pipeline and Guardian Pipeline. Pending shipper commitments and regulatory approval, the project is expected to be in service by November 2017.

Rover Pipeline
Location: Pennsylvania, West Virginia, Ohio and Michigan.
Stakeholder(s): Energy Transfer
Overview: The Rover Pipeline project is a new interstate natural gas pipeline system that will transport 3.25 Bcf/d of natural gas through approximately 713 miles of 24-, 30-, 36-, and 42-in. diameter underground pipeline through Pennsylvania, West Virginia, Ohio and Michigan. The project also includes the installation of four new mainline compressor stations and six new supply compressor stations, associated meter stations and other aboveground ancillary facilities. The project is designed to carry Marcellus and Utica shale gas to the Dawn Hub in Ontario. Rover anticipates that the new pipeline and its related facilities to Defiance, Ohio, will be ready for service in mid-2017 with an in-service to Vector/Dawn Hub in November 2017.

Sabal Trail Transmission
Location: Alabama, Georgia and Florida
Stakeholder(s): Spectra Energy, NextEra Energy Inc. and Duke Energy
Overview: In March, Sabal Transmission LLC filed hundreds of eminent domain lawsuits in Florida in the effort to get the project built. The proposed Sabal Trail project includes approximately 515 miles of 24- and 36-in. diameter pipeline with a target capacity of more than 1 Bcf/d. The pipeline will serve transportation service Florida Power & Light’s power generation needs, and Sabal Trail has agreed to provide transportation services to Duke Energy of Florida (DEF) for its proposed power plant to be built in Citrus County, Florida. This new pipeline infrastructure will also benefit the Southeast region of the United States by making available additional supplies and new energy infrastructure to support other regional power generators and the growing demand for clean-burning natural gas. The planned in-service date for Sabal Trail is June 2017.

Utica Marcellus
Texas Pipeline
Location: Kentucky, Louisiana, Mississippi, Ohio, Pennsylvania, Tennessee and Texas
Stakeholder(s): Tennessee Gas Pipeline (Kinder Morgan)
Overview: Kinder Morgan continues to develop its Utica Marcellus Texas Pipeline (UMTP) project, which is designed to transport purity and mixed natural gas liquids produced from the Utica and Marcellus areas. Products will be transported in batches to delivery points along the Texas Gulf Coast. In February 2015, the company filed for abandonment of a Tennessee Gas Pipeline (TGP) line with the FERC, which was approved in November. The proposed project involves the abandonment and conversion of 964 miles of natural gas service on TGP, the construction of approximately 200 miles of new pipeline from Louisiana to Texas, and new storage capacity and laterals in Ohio, all with an anticipated in-service date in the fourth quarter of 2018. The pipeline will provide connectivity to major processing and fractionation hubs in the basin and will have a maximum design capacity of 430,000 barrels per day (bpd).

Utopia Pipeline
Location: Ohio
Stakeholder(s): Kinder Morgan
Overview: The Utopia pipeline is a $500 million common carrier project, which will include a new approximately 215-mile, 12-in. diameter pipeline constructed entirely within Ohio from Harrison County, near Cadiz in the southeastern part of the state, to Fulton County, near the Michigan border. The pipeline will connect with and use existing Kinder Morgan pipeline and facilities to then move ethane and ethane-propane mixtures to eastward Windsor, Ontario. These ethane and ethane-propane mixtures are initially planned to be used primarily as a feedstock for producing plastic products. These products will largely be distributed to manufacturers, businesses and homes throughout the larger Great Lakes region. The Utopia Pipeline project will help meet the growing demand for Ohio’s Utica shale energy by delivering refined or fractionated products to its customers. The Utopia pipeline system will have an initial capacity of 50,000 bpd, with the potential for expansion to more than 75,000 bpd with the construction of additional pump stations. Construction is expected to begin in January 2017 and expected to be in service by January 2018.

This is not a comprehensive list of the natural gas pipeline projects in the United States. For updates regarding ongoing projects, refer to the Project Roundup on page 14 and published every issue.

North American Oil & Gas Pipelines provides quarterly updates of oil and gas pipeline projects in the United States in Canada. Previous reports were published this year in February, May and August. The next update will be February 2017, covering Canadian oil pipeline projects.